Before I write anything else, I want to wish you all a Merry Christmas and a Happy New Year 2018, I hope you all will have a brilliant year ahead. The month of December is all about the festivals and spreading positive energy everywhere. And talking about the end of December, it is Christmas and New Year time. What a great opportunity to get-away with your team and celebrate this beautiful time of the year, right? Exactly! That’s why, we, the Catch Themes family decided to go on a trip to Bandipur for the celebration of Christmas 2017 and New Year 2018.

We all decided to go to Bandipur on 23rd of December and return on the 24th. It was kind of like a weekend get-away for the festive season. On Saturday, 23rd December, we all packed our bags and left for Bandipur. There were a total of nine people on our trip, out of which four of us (including myself) started our journey on our bikes, and the rest of the team members on a car. 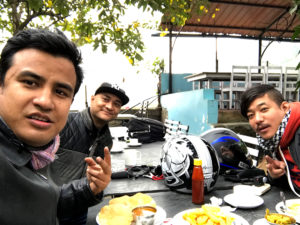 We left on our bikes at around 7 in the morning. Because we (the team on the bikes and the car) were traveling separately, we decided to meet at the Hamlet Restaurant in Dhading for breakfast. We reached there at around 9 A.M. and had our breakfast. After that, we all left the restaurant together for Bandipur.

We reached Bandipur at exactly 1 P.M. Upon reaching Bandipur, we checked in to Hill’s Heaven Hotel. It was a small but cozy place. We stayed there for an hour or two and had our lunch. We placed all of our belongings in our respective rooms and then, we headed outside to take a stroll in the beautiful village of Bandipur. 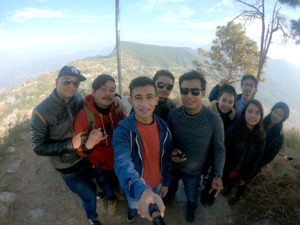 For our first visit, we decided to go to a major go-to place of Bandipur, the Thani Mai Temple viewpoint. We came to know from the locals there that the main reason to climb up to Thani Mai is for the spectacular sunrise views from Gurungche Hill. We took some great snaps there to further conglomerate the great vacation we were having. Some of us were really tired after the climb as we just had completed a 6-hour journey. So, we headed to the hotel for a much-needed rest. After a while, we headed out again and this time we went to a place called Tudikhel. It was kind of surreal because we have a place called Tudikhel here in Kathmandu as well. Tudikhel itself was a spectacular view as well. After enjoying the ambiance of the place, we took a rather religious visit to the Khadga Devi temple. It is a well-known Hindu temple of Bandipur. After being religious for a while, we headed out to visit a place called Tin Dhara. It was kind of a long walk than we had expected. When we finally reached there, we saw there were around 5 dhara (stone taps) out of which only 4 had running water. We, then, took a group snap at that place. It was getting kind of dark at that point. So, we decided to head back to the hotel.

We reached our hotel at around 5-5.30 P.M and then we gossiped for a while and had light snacks. It was already 8 P.M by then. So, we went downstairs to order ourselves dinner. We had to wait for around an hour for them to serve our dinner. After we finished our dinner we all were pretty swamped, so, we decided to hit the hay.

Next day, all of us had woken up by 7 A.M. We, then, packed up our stuff and went downstairs to grab ourselves a quick bite. We checked out from the hotel at around 9 A.M and we were en route to the valley.

We didn’t stop until the next 100 km when we finally stopped at the Hamlet restaurant (remember the place?). We had our lunch there and then, we were on our way again. Unfortunately, the staffs who were traveling by car had gotten stuck in a pretty bad traffic jam. So, us, who were on motorbikes went on ahead and reached sooner. We reached Kalanki at around 2 to 3 P.M. and we went our separate ways towards our respective homes. According to the staffs on the car, they too reached Kalanki around 4 P.M.

Now, looking back to those days, it was really a memorable visit with my second family. We had a lot of fun even though it was a quite tiring trip. We took many pictures, visited a lot of new places, and most importantly made many beautiful memories in a beautiful place. I, personally would like to recommend everyone who reads my blogs to visit Bandipur at least once in their lifetime.

Finally, I would like to conclude this post by once again wishing all you folks a belated Merry Christmas and a wonderful New Year 2018! May this year bring joy to all of you! Cheers!!!!

P.S. Here are a few snaps of our trip to Bandipur.